A truly lazy OrderBy in LINQ

Jon Skeet recently discussed what it means to be “lazy” (in the context of LINQ to Objects). He introduced some new definitions based on how the operator processes the source sequence. Another aspect (which Jon didn’t cover) is how lazily the operator produces output when its results are enumerated.

Let’s take a concrete example: what’s the difference in running time between these two statements?

The running time of both these statements is actually about the same. Even though the OrderBy documentation states that “This method is implemented by using deferred execution. … The query represented by this method is not executed until the object is enumerated”, what that actually means is that the sort isn’t performed until the first call to MoveNext on the enumerator returned by OrderBy. But when that first call to MoveNext happens, the entire input is sorted, even though only the smallest ten items are required.

There’s no reason this needs to be the case; Wikipedia has an extensive discussion on efficiently selecting the k smallest elements from a collection. Quicksort is a natural choice for implementing such an algorithm: since it divides the array in half around a pivot element, it’s easy to defer sorting the right-hand side (i.e., elements greater than the pivot) until we know that the consumer needs them.

Using the yield statement will make implementing a lazy algorithm easy, but quicksort is typically implemented recursively, which is hard to combine with yield (without using foreach statements that simply yield the recursive output). Instead, we can use a stack to maintain the state of the recursion and implement it in an iterative fashion. As we divide the array in half, we push the pieces that are not yet sorted onto a stack. When we detect that a section of the array is completely sorted, we yield those elements to the caller. This ensures that the sorting work is not done until it’s needed. 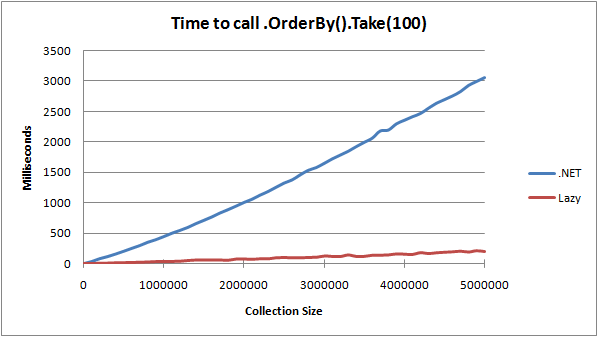 Not only that, but the algorithm is no slower if you end up enumerating the entire sequence (and thus sorting every element). The full source code is available at GitHub (specifically in the OrderedEnumerable.cs and ElementComparer.cs files); the following excerpt illustrates the core concepts. (Note that this simplified version doesn’t maintain compatibility with OrderBy: specifically, the sort is not stable, and you can’t chain a .ThenBy to the resulting sequence. The full implementation at GitHub does not have these limitations.)